If you are a brownie fanatic then you are going to love this! Who knew there where so many different types of brownie recipes out there? If you want to try some yummy and fun brownies, check out these brownie recipes!

To view the full instructions for any of these brownie recipes, please follow the link below the picture.

Take these bars to another level with a drizzle of silky Nutella Ganache and you’ve got the greatest brownie ever!

Layers of fudgy Birthday Cake Oreo stuffed brownies and Funfetti fudge are topped with more Oreos and plenty of sprinkles. Drizzle these bars with hot pink candy melts and you’ve got a party in a brownie!

You will go bananas over these Fudgy White Chocolate Banana Brownies!

The chewy, fudgy, dense texture of a brownie with dreamy banana flavor! SO so good!!

Does Neapolitan ice cream remind you of being a kid again? Each of these layers adds a twist on the original dessert.

A layer of cheesecake between the strawberry preserves and brownie will please everyone’s tastes buds!

These Lunch Lady Brownies are the most chocolatey, fudgy and moist brownies ever! Just like the ones they served for school lunch dessert, but this homemade version is better!

These Rocky Road Brownies, my friends, are nothing short of spectacular! Thick chocolate brownies covered in all kinds of deliciousness!

This easy one bowl recipe makes the most delicious brownies!

The world needs to know. The sweet taste of banana bread brownies topped with a brown butter frosting.

Homemade copycat little Debbie cosmic brownies – just like you remember as a kid!

This easy to make recipe includes a rich chocolate fudge frosting and rainbow sprinkles on top! Make this brownie dessert to share with your family!

Fudgy brownies topped with a layer of creamy sweet coconut and finished with a smooth chocolate ganache.

Use your favorite boxed or homemade brownie recipe for this decadent triple-layer dessert.

With a dense brownie on the bottom, Nutella fudge in the middle and chocolate on top, you can’t go wrong.

French silk pie married brownies and they had a baby: a fudgy brownie topped with an eggless french silk filling!!

Make the brownies from scratch, or use a boxed brownie mix as the base of this recipe. You’ll love this decadent dessert!

These Strawberry Marshmallow Brownies are the best brownies you’ll ever eat!

Rich & chewy on the inside and ooey-gooey on the outside!

The Best Fudgy Cocoa Brownies… So simple but SO delicious, they are gone in seconds!

These cookies and cream brownies are super fudgy, thick and a little bit chewy.

The secret is condensed milk. It keeps these bar gooey, chewy and fudgy.

If you love white chocolate… and cheesecake… and brownies, get ready to seriously fall in love, because this dreamy combination, is now a reality.

You will love these marshmallow brownies. There’s no question about it.

How could you not love a gluten-free dessert that combines two of the best things ever – a fudgy, dense, chocolatey brownie and the fluffiest marshmallow meringue frosting you could possibly imagine.

These AMAZING Cheesecake Brownies are a delicious brownie dessert filled with a layer of cheesecake and baked to perfection.

Magic Layer Brownie Bars, like the Seven Layer Bars you might remember from your childhood, only better.

Instead of a graham cracker cookie base, these bars start with a rich chocolate brownie, and layers of toasted coconut, chocolate chips, butterscotch chips, and sweetened condensed milk. It’s the ultimate decadent dessert!

They’re dense, chewy, fudgy and made in one bowl with no mixer. You can think of them as butterscotch brownies with deliciously gooey centers.

Strawberry Brownies are a super simple springtime dessert that comes together easily with just a few pantry ingredients and some fresh strawberries.

Dessert doesn’t get any better than this. Pssst! Short on time?

Try the quick and easy version of this recipe here! These are every bit as rich, decadent, and indulgent as they look.

These homemade Oreo Reese’s Fudge Brownies are thick, rich, and fudgy – just the way a brownie should be!

These make an easy Halloween dessert, too! 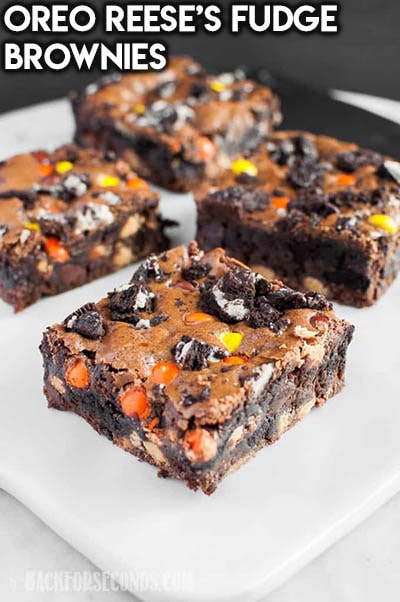 These Salted Caramel Brownie Bites are made with a simple, from-scratch, brownie batter and are filled with a rich (easy to make!) caramel filling!

Top everything off with a sprinkle of flaky sea salt for a dessert you’ll be coming back to over and over again!

It’s an easy, one bowl brownie recipe with the most delicious white chocolate flavor.

Cookie Dough Brownies made with a rich dark chocolate brownie base and an eggless cookie dough layer.

The best part of cookies and brownies all in one!

These tahini brownies are anything but your average, one-note brownies.

Moist chocolate brownies with a generous swirl of tahini, a paste made from sesame seeds which takes the brownies to a whole new level of flavor bliss!

These chocolate M&M’s Brownies are full of candy goodness.

They are a great fudgy snack for any time of day. They also make great lunch box treats or after school snacks. Add a glass of milk and you are good to go.

These candy cane brownies are the perfect Christmas brownies.

They start with fudgy chewy brownies, then they’re topped with a thick layer of creamy peppermint frosting and sprinkled with crushed candy canes.

These mint brownies from scratch are the best you’ll find.

Sno Ball Brownies are a brownie version of the popular Hostess snack cake.

A rich, fudgy brownie is covered in marshmallow fluff and pink coconut. These brownies are a festive treat for Easter.

You will swoon over these rich, decadent brownies filled with chocolate baking melts, chocolate chips, and bananas. Ooey, gooey and delicious!

These Graham Crackers S’Mores Brownie Bars are gooey, chewy, a little crunchy, loaded with chocolate and topped with marshmallows and graham cracker bits for a gooey, fudgy dessert you’ll love! 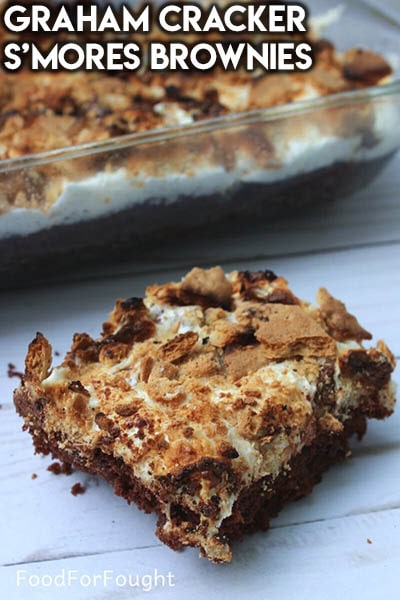 These pecan pie brownies are a chocolaty twist on the traditional pecan pie!

They make a great Thanksgiving dessert but you can make them all year long!

If you are looking for the perfect homemade brownie recipe, look no further!

These Marshmallow Brownies are simple, delicious and addicting!

This rich and fudgy mocha brownies from scratch recipe is packed with brewed coffee and chocolate flavors.

The coffee glaze on top makes them very decadent.

Super fudgy gluten-free brownies will be a staple recipe for years to come.

It’s a great base recipe to make any kind of decadent brownies you’d like!

Is there anything better than peanut butter and chocolate?

For you guys that are not familiar with Matcha, it’s basically a very fine ground specialized green tea.

It has a richer and creamier taste than your usual green tea, which makes it perfect for dessert recipes.

These hot fudge swirled red velvet brownies (made from scratch!) are super fudgy and indulgent.

The perfect red velvet recipe for your Valentine’s Day treat!

Millionaire Brownies are a spin-off on millionaire shortbread, a shortbread biscuit that’s topped with caramel and chocolate.

Obviously, millionaire brownies are much richer than shortbread!

These lemon brownies are so easy to make, combined with fresh lemon juice, not too much sugar and a little bit of lemon zest which gives that special lemon taste.

Enjoyed these brownie recipes? Then pin it for later!